Of course the week could not go by without mention of the big news of another royal engagement. Although only announced this week, apparently Prince Harry proposed to Meghan Markle a few weeks ago whilst they were in Prince Harry’s home in London (Notthingham Cottage at Kensington Palace). And she accepted! So the big question is: what is Meghan Markle’s engagement ring like?

From what we can see of the photos, Meghan Markle’s engagement ring is a three stone or trilogy ring. It features a large rectangular cushion cut diamond in the middle. The cushion cut diamond is flanked on either side by two round brilliant cut diamonds. The central diamond is very large. It looks like it is at least 2.00 carat. Apparently, it was sourced from Botswana. The round brilliant cut diamonds are very special indeed as they were from Princess Diana’s personal collection.

Botswana is a country that is well known for its rich diamond deposits. Diamonds have been mined in Botswana for many, many years. It is a place of great beauty that Prince Harry often visited as a child. In fact it is where he and Meghan went away together not long after they first met.

Prince Harry Designed the Ring Himself

Prince Harry is said to have designed the ring himself. He wanted to incorporate his mother’s diamonds to make sure that “she is with us on this crazy ride”. The ring was made by Cleave and Company. They are jewellers based in Buckingham Place in London. They are HM The Queen’s “Manufacturers of Insignia” and “Medallists” to HRH The Prince of Wales. The ring has a yellow gold band and the diamonds are set in white gold. It certainly is a stylish and beautiful design. A three stone ring is said to represent the couple’s past, present and future together, so it is a ring design that can have great meaning as well. With the inclusion of Diana’s diamonds, we know that this is certainly the case.

And what of the proposal itself? It seems that Prince Harry opted for a lovely low-key, romantic proposal. Meghan said that he got on bent knee and proposed while they were at home cooking a roast chicken. Unlike many couples, Prince Harry said they have spent much of their first year and half together at home, out of the public eye, so it seemed the perfect place to pop the question. In fact, he recommends staying at home instead of a lot of dating! He said that spending so much quiet time together had helped them to become very close as a couple very quickly…

It really is a beautiful ring, and Prince Harry and Meghan seem to be very happy. Not only this, but from what they said in their interview with the BBC that was held to announce their engagement, they are keen to make the most of their privileged position in society to do a lot for those who are in less fortunate situations than themselves. We can only wish them the very best in their married life together and in their efforts to make the world a better place! 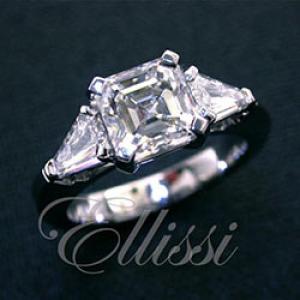